In the last few years we have come across amazing growth in the form of wearable technology right from fabrics which tends to interact with the device to sunglasses that tint on demand and wearable electronics are set to enhance the lifestyle of individuals. Since 1800s, acoustic devices like the microphone and loudspeaker were designed and developed for the mechanisms of dynamic, piezoelectric and electrostatic acoustics.

Electrostatic acoustic devices produce sound waves through the vibrating charged stator via an externally applied electric field while piezoelectric devices tend to operate by using the inverse piezoelectric effect. Besides this, the widely used dynamic acoustic drivers use a moving metal wire coil like voice coil which was first developed in 1874 by Siemens.

A new entry of a stretchable loudspeaker is now added to the list. Recent progress of fabrication technology as well as materials science has given way to the investigation of next generation acoustic devices like the graphene based flexible and transparent sound sources, thermo-acoustic Stretchable Loudspeaker and ion gel based transparent loudspeakers. Inspite of the progress done, there seems to be barriers which tend to slow down the technological extension from flexible to stretchable acoustic devices. 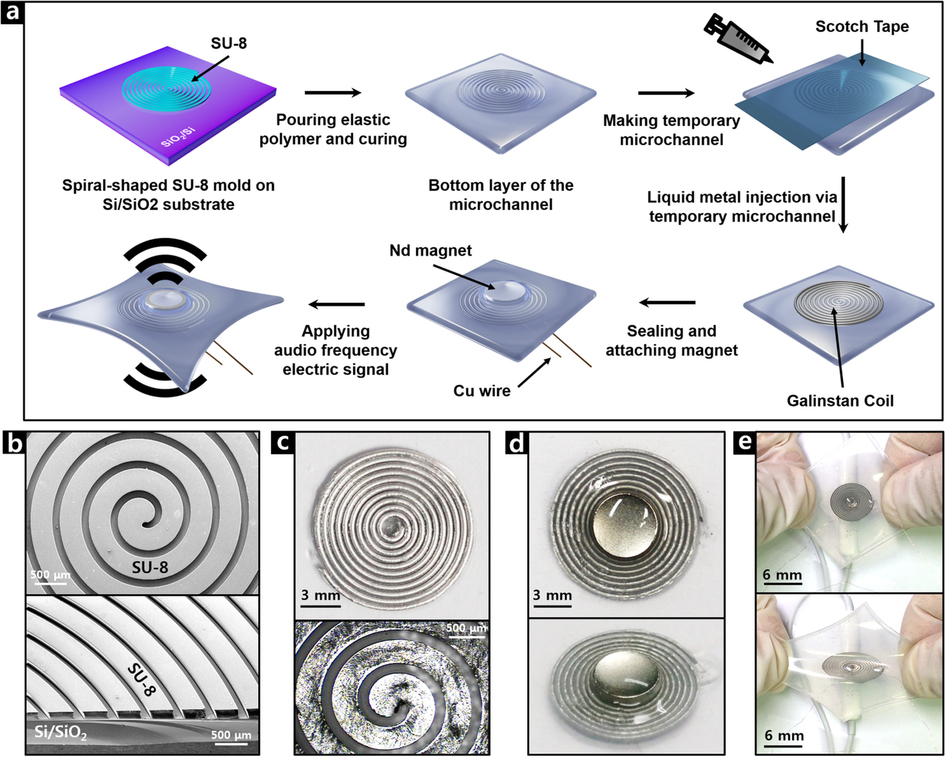 Skin Like Device Attached to Wrist to Record & Playback Sound

However suitable resources providing mechanical stability in fabricated devices on the drastic deformation of stretching is essential and keeping in mind the different applications of wearable as well as bio-implantable devices, it is now essential for stretchable acoustic devices for body attached application like sensing biological indications, hearing aids as well as notification of information through sound.

Researchers have now developed a skin like Stretchable Loudspeaker device which tends to record as well as play back sound when attached to one’s wrist. Professionals in electronic engineering and acoustics came together to find materials that could be utilised in the creation of flexible acoustic device which could provide mechanical stability whenever stretched.

Jeong Sook Ha, lead researcher from Korea University informs IFLScience that the method and the design had to be `continuously modified’ in the development of the stretchy gadge. She states that one of the most `challenging aspects of the study was replacing the `rigid metal voice coil of dynamic acoustic device with an elastic liquid metal coil of Galinstan’.

She together with her colleagues have been carrying on research stretchable devices like Stretchable Loudspeaker comprising of sensors as well as energy storage devices and in their study they came across liquid metals like Galinstan, a metal alloy with melting point of 19 degrees Celsius which could be especially appropriate for stretchable devices. 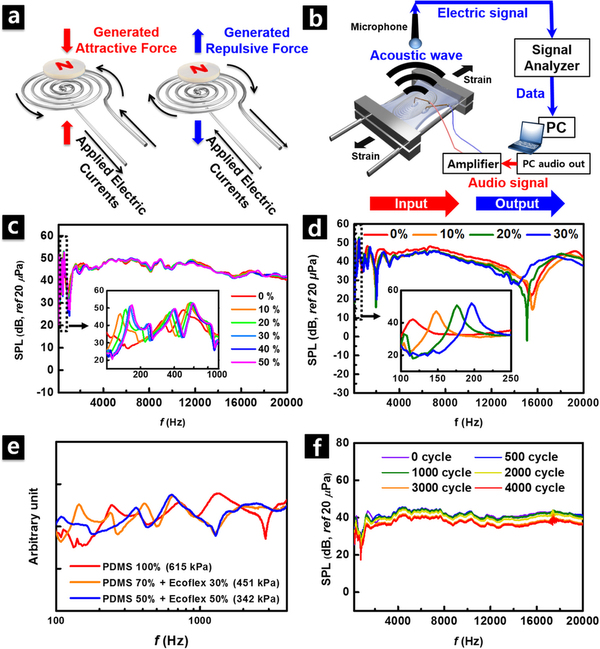 The notion of using Galinstan in the creation of stretchable acoustic device came from one of her graduate student and first author of the paper, Jin Sang Woo. In order to fabricate a liquid metal coil, Galinstan was injected in a micro patterned elastomer channel and this fabrication Stretchable Acoustic Device – SAD was operated at the same time,as a loudspeaker as well as a microphone. Galistan tends to have outstanding electrical conductivity, a low melting point, low vapour pressure as well as low toxicity compared to mercury, which according to Jeong Sook Ha is a good fit for stretchable wearable electronics.

On measuring the frequency response, it indicated that the SAD was mechanically stable under both 50% uniaxial as well as 30% biaxial strains. Moreover 2000 repetitive application of 50% uniaxial strain did not prompt any noticeable degradation of the sound pressure. Both voice together with the beeping sound of an alarm clock were successfully recorded and played back through SAD when it was attached to the wrist under repeated deformation.

The results portrayed the high potential of the fabricated SAD with the use of Galinstan voice coil in different research fields which include stretchable, wearable and bio-implantable acoustic devices.Jeong Sook Ha describes that the operating principle is essentially the same when applied to earphones or microphones driven with the use of interaction between a magnet and current flowing oil. The Stretchable Acoustic Device was said to record human voice together with the beeping alarm clock with capabilities of playing back when attached to the wrist. Study demonstrating how the device was able to do this while being stretched repeatedly had been published in Scientific Reports.

According to Jeong Sook Ha, she states that though flexible devices developed so far, have made their contribution to the development of the wearable electronics, there seems to be fundamental limits. She is of the opinion that the main problem with flexible devices is that several of them are not adequately designed to deal with a surface like human skin and these devices have to manage with a range of motions, like stretching, twisting and bending. Jeong Sook also recommends that there are several body attachable as well as wearable acoustic applications, to the stretchable acoustic devices which comprise of wearable health monitoring device for the purpose of measuring heart rate, hearing aids as well as information notification device that could be attached to the body.

Researcher would continue in working for the optimization of the structural design on their devices since the acoustic performance is presently not up to the mark to be commercialized at this stage, hoping to make the device smaller as well as thinner.