BeeRaider Keyboard – A Bee in Flight

When Ray McEnaney types, he is confident that it is the most effective way of doing so and it is his keyboard which has brought about this change. Not satisfied with the limitations of the out-dated QWERTY design, he spent the last decade in designing an updated version.

Taking into consideration that the universal key arrangement had been designed in the typewriter age, patented in 1878, a change was essential. McEnaney was dissatisfied with the other typing options people tend to turn to. The most noticeable one is the Dvorak that focuses on minimizing the distance the fingers should travel thereby reducing fatigue.

He was of the belief that learning curve would be helpful and users should seriously consider being skilful. Here’s where the BeeRaider took shape in the form of a keyboard which resembles a bee in flight with two wings of keys that have been arranged on either side of a radial centre.

It is a buzzy concept, the layout being larger with the keys needed placed at the centre rendering less strain and fatigue according to McEnaney. The keys which he considered more useless that includes Q, K and X was arranged farther away. 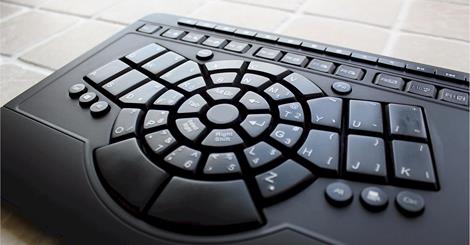 He assures that anyone could be a capable BeeRaider typist within 20 minutes. His secret lies in the key position as well as the related mnemonic learning tools through which one can practice typing phrases such as `I hate waste excess’ and `Just before dawn starts’.

It seemed a bit odd typing in this fashion though he was amazed on how natural it felt after a period of five minutes with the fingers reaching for the right letters when needed. With the primary characters, they keys that were used the most were grouped together, were helpful in memory retention also.

Cognitive neuroscience researcher at Vanderbilt University, Kristy Snyder, comments that `we think it’s a much implicit knowledge of where the fingers go, the motor system learns where the keys are and that’s how you learn to type’.

Snyder is unsure if the keyboard layout could affect the typing speeds and had been experimenting with the memory of the typists on the keyboards. She found that most of them could only recognize halfthe keys used daily by them.

She found the use of Dvorak and QWERTY layouts seemed to be unconnected to retention which suggests that typist do not know much on key locations on the keyboard, irrespective of them being exposed to the keyboard for two hours or twelve years.

This could make the possibility of the BeeRaider probably taking off and if people tend to have no inherent recollection of keys, then they should be ready for new changes of working. She states that `using a new system could be better than QWERTY, though to change key mapping would be difficult’.

If one is on the lookout for a challenge, the BeeRaider would be available for pre-orders at $112.49 and one has the option of optimized layout or radial QWERTY design. Users could try the BeeRaiders’ Android app for $1.92 but it could be tricky to use the same on small screens.