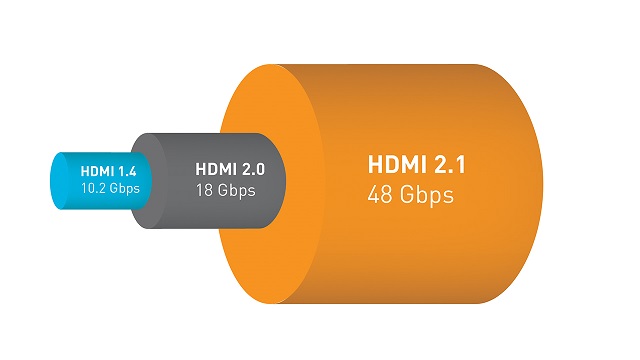 What is HDMI? HDMI stands for High-Definition Multimedia Interface. It is proprietary hardware which means a patent controls it. A digital interface transmits uncompressed video signals and compressed and uncompressed audio signals in a single cable between HDMI compliant Source and Sink. In other words, it is a standard for the digital replacement for the old analog video standard. It complies with the EIA/CEA-861 standards.

EIA (Electronic Industries Alliance) is an American industry standard for electronics manufacturers in the USA. These kinds of industry standards aim to ensure gadgets of different manufacturers are compatible and interchangeable. For example, EIA/CEA-861 standards stipulate some standards for sending uncompressed video in the waveform. And audio, auxiliary data, and other Metadata comply with VESA EDID.

What are HDMI Versions and Their Specification:

HDMI 2.1 specification is the recent update of Specification. It supports higher video resolutions with higher refresh rates like 8K @ 60 Hz and 4K @ 120K. Besides, it can support solutions up to 10K and dynamic HDR formats also. The bandwidth capability increased to the maximum of 48GbPs. A special Ultra high-speed HDMI cable is needed to support a bandwidth of 48Gbps. It is backward compatible with the old version as and when required.

Therefore you can use it with the existing setup of High-Definition Multimedia Interface gadgets. Moreover, it has extremely low electromagnetic interference. Therefore data transfer will not be affected by the interference of the wireless devices nearby. 2.1 Ultra High-Speed HDMI Cable is a category-3 cable. Category-3  exceeds the requirements of the latest international EMI standards to reduce interference with wireless services such as Wi-Fi significantly. Ultra High-Speed cables support all 2.0 and 1.4b features as well.

It was released in the year 2016 March. And, it is backward compatible.

It does not require any need for new cables and connectors. Initially, it supported all the features of 2.0a standard of HDR 10 format and static Metadata.

In 2.0b HLG, it combined with HDR and SDR in the same TV signal. Thereby it saves broadband for more TV channels.

Note: Most TVs do not support HLG; hence the consumer faced some problems.

2.0a was released in the first quarter of the year 2015. It added support to High Dynamic Range Video (HDR) with static Metadata. It supports all specifications specified in the CTA-861.3 Specification.  Its prime objective was to enhance the picture quality. And simultaneously enable minute details of both bright and dark parts of the image.

2.0 released on 2013, September 4. It is backward compatible with previous rolled-out versions of the Specification. In addition, it increases the bandwidth to a maximum of 18Gbit/seconds.

It uses TMDS encoding for video transmission with a maximum bandwidth of 14.4Gbit/ Seconds. It carries a 4K video at 60Hz with 24bit/px color depth. Besides, it supports Rec. 2020 color space and up to 32 audio channels with a sampling frequency of 1536 kHz.

2.0 support TMDS encoding for video transmission with the maximum bandwidth of 14.4Gbit/s

2.0 can deliver multi-stream audio to a maximum of four users

It is capable of delivering dual video streams to multiple users on the same screen.

The 1.4b version also includes many minor numbers changes. It provided full HD for both pictures used for 3D 1080p video at 120Hz

It is a minor update that focused on the improvements of 3D video technology. In addition, it incorporated the 3 D broadcast formats that were not finalized during the earlier 1.4 version.

Here are the following significant enhancements introduced in the 1.4 specifications:

What is HDMI Ethernet Channels:

High-Definition Multimedia Interface Ethernet Channels employed for high-speed networking. It allows the user to use all their IP-enabled devices without any additional networking Ethernet cable.

Audio Return Channel allows the connected TV with an in-built tuner to send audio data upstream to the surround sound audio system without any need for a separate cable.

It provided 4k support to the devices, which enable video resolutions above 1080p. In addition, it supported digital displays, which are rival to the digital cinema systems.

It enables real-time- content signaling to optimize the picture setting based on the content type. Besides, it allows automated and straightforward picture setting mode without user intervention.

It supports the additional color spaces for color models used in digital photography and computer graphics. Furthermore, it enables HDTVs to reproduce the digital cameras’ rich and natural life colors with consistency and accuracy.

It has a provision for the micro connector to connect phones and other portable devices.

1.3a was released for Cable and Sink modification for type C, source termination recommendations. It removed undershoot and maximum rise and fall time limits. However, it altered the CEC capacitance limit and commands for timer control. And, it enabled the optional ability to stream SACD in bitstream DST format instead of uncompressed raw DSD

1.3 increased TMDS clock to 340 MHz of Bandwidth 10.2Gbits per second. The earlier versions allow the encoding given a maximum video bandwidth of 8.16 Gbits per second. The 1.3 version additionally added the ability to carry metadata defining color gamut boundaries. It allowed the Dolby TrueHD and DTS-HD Master Audio stream for external decoding by AV receivers. In additon, It incorporates automatic audio synchronizing capability. It defined cable categories one and two. The Category 1 cable tested up to 74.25 MHz, and Category 2 tested up to 340 MHz. 1.3 versions, added the new type C Miniature connector for portable devices.

1.2a fully specifies the CEC (Consumer Electronics Control) features, command sets, and compliance tests. It helped the user to operate multiple devices with only one handled remote control unit.

1.2 was released in the year 2005. It added options of One Bit Audio used in Super Audio SCs at a maximum of 8 channels. It modified the HDMI protocol to suit more to computer devices as well. Furthermore, it added manufacturers’ ability to employ vendor-specific formats allowing any arbitrary resolutions and refresh rates. Besides, it employed additional support to several new formats, including 720p at 100 and 120Hz, and modified the pixel format support to native RGB output.

It was a minor update released to add support for DVD-Audio.

HDMI 1.0 is the incarnation of HDMI, and it subsequently underwent many numbers revisions and updates.

It includes the basic HDMI capabilities in a single digital audio/video connector interface.

It employed the basic DVI link architecture concept that is needed for video streaming. In addition, its audio-video interface provided high-definition video transfer.

It has the provision for up to 8 channels of uncompressed digital audio. Have the data transfer up to 4.95 GB per second. And, it allows a maximum TMDS clock of 165MHz. Besides, it defines two connectors, A and B.

In addition, it supported RGB video, and color depth of 30 bit/px or 36 bit/px is allowed when using 4:2:2 sub-sampling, but only 24 bit/px color depth is permitted when using RGB or YCbCr 4:4:4. It allowed only a few pre-defined video formats. Moreover,  it enabled playback of the blu-ray disc at the full resolution.

What are HDMI Connector Types:

They are Type A, B, C, D, and E.  The connector can be directly connected to the device. They carry HDMI signals with TMDS. The type B connector additionally carries second TMDS data signals which are much needed for higher resolution displays using dual-link.

Therefore it is slightly larger.  Type C connector carries the same signal as type A. But it is smaller and compact intended for mobile applications.

Types A and B are specified in the 1.0 version. The external dimension of the Male connector (Plug) is 13.9 mm × 4.45 mm, and the Female connector (Receptacle) inner dimension is 14mmx4.55mm. There are 19 pins with bandwidth to carry all SDTV, EDTV, HDTV, UHD, and 4k Modes.It is electrically compatible with single-link DVI_D.

It is a connector of size 21.2 mm × 4.45 mm. Moreover, it has 29 pins. Besides, it carries six differential pairs instead of three for the use of high resolutions displays.

It is defined in the HDMI 1.3 specification, and this mini connector is smaller than type A.  It is a connector of size 10.42×2.42mm. And it has the same 19-pin configurations. It is meant for portable devices such as Smartphones and digital cameras.  The C-type mini connector can be connected to a type “A” connector using a type A-to-type C cable.

D is a micro connector. The connector resembles a micro USB connector.  The connector size is 11.5 mm × 4.5 mm. it has the standard 19 pins of type A or C. But the pin assignment of Type D is different from both A and C.

It is meant for automotive connection systems. It has a locking tab to keep the cable firmly connected. The locking tab keeps the cable in position firmly against any automobile vibration. The protection shell prevents moisture and dust particles from entering. Besides, a relay connector is available to connect the standard cable to the automotive type.

What are HDMI Male and Female Connectors:

The female connectors usually found built into both Source and Sink Devices. It is fixed as a socket intended for a male end cable to connect to it. Generally, the cable has male connectors at both ends.  They are directly plugged into the female sockets of the source and sink for power and data transmission. The female connectors have pins, and they cannot suffer a short circuit. Therefore, firmly fixed into the body of the gadgets.

What is HDMI Cables:

According to 1.4 specifications, cables are classified into the following five categories.

Earlier Version 1.3 specifies cable standards, and the cables categorized into Category one and Category two. Category – 1 marked as standard and Category- 2 marked as High Speed. A cable of 5 meters of category-1 can be manufactured inexpensively using 28AWG conductors with better quality construction materials. With high-quality construction materials with 24AWG conductors, a cable may reach a maximum of 15 meters for better quality. Tested category-2 cables can only give better results.

What is HDMI Licensing:

HDMI- High-Definition Multimedia Interface specification is not an open standard; manufacturers need to get a license from HDMI LLC to implement HDMI standards in any of their component products for a fee. The companies who authorized to use HDMI in their products are  HDMI Adopters.

There are two fee structures associated with the HDMI adopter apart from the royalty fee.

For High volume Products, more than 10k units are 10K USD per year

For Low volume, less than 10k products are so 5k USD per year + One USD per unit

The royalty fee is payable on licensed products if sold as a standalone product directly sold to the customer.

What are HDMI Features:

Support to Color Space and Deep Color with Color depth