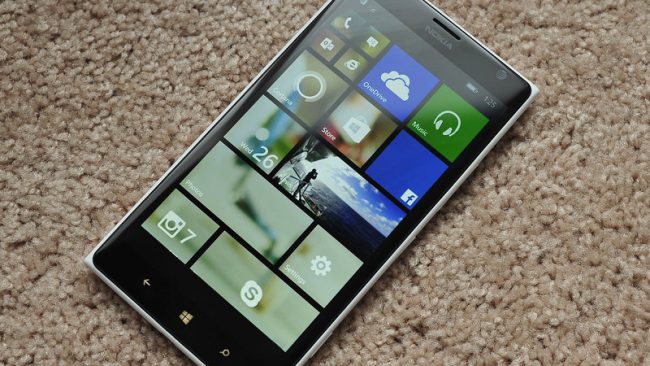 I started using Windows Phone 8 back in 2013, when I left behind my HTC One for a Nokia Lumia. At that time I had a good season with Android and HTC (Since the glory days of HTC Evo), and the OS was already starting to tire

The problem was, already then, the user interface. Android, in times of Gingerbread (2.3), Jelly Bean (4.1) was a singularly ugly and completely inconsistent operating system. It did not help that Google, in those years, had a rather disinterest attitude with the design of third-party applications and that seemed indifferent to the simpler animations of its operating system stumbled half the time. The OS, in addition, had basic problems, such as the strange division between home pages and applications drawer, a menu of sophisticated options and notifications that were useless.

Of course, if I wanted a consistent medium interface I could always buy an iPhone, but those days I did not want too much either. The iPhone 5 had a small screen compared the HTC One, and although I spent the day complaining about how ugly Android was, I spent enough hours fiddling with launchers and installing alternative versions of Android to know that iOS would get on my nerves .

That’s when I noticed Windows. My wife had been using it for some time (first on an HTC Arrive, then on an HTC 8S), and it had always intrigued me. The user interface was clear, clean and consistent, and it worked smoothly, without pauses, even in low-end hardware.

The homepage combined an impressive density of information, an elegant presentation and many options to mold it to your liking. The operating system was full of great details, such as the integration of the activity of your contacts in social networks in their profiles in the calendar, including photos. It was true that by then Windows had a considerable application deficit, but Microsoft was working hard to remedy it. When the 925 was put on sale, the hardware of Nokia (it is still the best mobile I’ve had in that aspect) and its fantastic camera did the rest, and I made the leap.

The advantages of using Windows Phone in 2018 …

Five years later, I still have Windows Phone 10. The 925 lengthened it several years, basically because it was an excellent phone. Last year I changed it for an Alcatel Idol 4S. This phone is, today, the last in Windows Phone 10; Microsoft is trying to get rid of them for $ 99. The hardware is that of a solid mid-range phone in Android, with a mediocre camera, but design is excellent.

The operating system, yes, is still infinitely higher for my taste than its Android version.

The reasons are similar to those that led me to adopt Windows Phone five years ago: Android is still ugly, inconsistent and clumsy compared to the Microsoft OS. It is not a question of the sloppy versions of Android that many manufacturers insist on perish, like that strange idea that they have in Samsung that they know how to design software or competent voice assistants.

The thing goes beyond. My wife, who has less patience with morbid software platforms than me, went a couple of months ago to a Google Pixel 2, in theory the Rolls-Royce of the Android interface. The hardware, as usual with HTC, is great, and the camera is absolutely amazing, but the OS is almost as ugly and confusing as it was five years ago.

It has taken 4 Gig of RAM and a processor with eight cores so that the pileup will not stumble when you open the Weather Channel app, but at least that has been solved. Even so, my list of grievances is wide: the notifications menu is sloppy, the idea of ​​depending on widgets makes your home page look like a Dadaist collage if you want to have some functionality in it, the application drawer is a wall of icons without order or sense, and holy heavens, what little time these people dedicate to making the operating system have a certain internal order or coherence. The OS is still the same bag as it was five years ago.

My problems with iOS, on the other hand, have evolved a bit. I have an iPad (2017 model) that I use daily, and although the hardware is essentially perfect, iOS now combines tons of functionality with an interface that never seems to know how to put it in front.

One thing as simple as changing songs on Spotify when I’m reading something in Safari requires elaborate juggling. The notification system is primitive. The mail and calendar client is bad enough to have ended up using the Microsoft Outlook app. And of course, the home screen is still a wall of icons with zero information, always demanding to enter applications to see what new information they have.

iOS now combines tons of functionality with an interface that never seems to know how to put it in front. One thing as simple as changing songs in Spotify when I’m reading something in Safari requires elaborate juggling

Windows Phone 10 removes almost all the problems that I have with Android and iOS at a stroke. The notifications are clear, they are grouped naturally and give the information you need. The homepage is configurable, it gives access to tons of information at a glance thanks to its live tiles, and allows you to prioritize applications and content to your liking by giving them more or less space, without ever being visually inconsistent. The boxes with information have never made much sense in the start menu of the Windows desktop version, but in a phone they are perfect. Outside the homepage, the entire interface is simple, elegant and consistent. Although Windows Phone 10 is worse than 8.1 in some aspects, since Microsoft abandoned many of the most ingenious ideas (such as horizontal apps with typography greater than the screen) to get closer to Android and iOS, the operating system is orderly, clear and functional . There is an obvious attention to give access to the things that we use most usually a few clicks, and for those who have strange needs it is very easy to configure the system to have them at hand.

Windows Phone 10 removes almost all the problems that I have with Android and iOS at a stroke. The notifications are clear, are grouped naturally and give the information you need

And the problems of using Windows Phone in 2018

The problem, of course, is that we are talking about an operating system that is essentially dead, and to which almost nobody pays attention anymore. Every week some more or less known application disappears from the Windows Store; before Christmas was the New York Times, this past week IMDB. Programs that survive, such as Spotify, often remain frozen in time, with no updates or new functionality.

You get used to tolerate that things like Twitter are constantly hanging (although the truth is, Twitter also hangs often on iOS and Windows 10 desktop …). The few level apps still with active developers, like WhatsApp, only get access to new tricks and options weeks or months after their Android and iOS counterparts.

Still, I can not help but continue using and enjoying my phone, in no small measure because even with these limitations, it continues to serve for everything I need. For starters, the browser (Edge) is excellent, so the loss of many applications is relatively non-traumatic. I can read the New York Times, IMDB without problems, and sometimes with better interfaces than the brown one they have in their native applications.

Every week some more or less known application disappears from the Windows Store; before Christmas was the New York Times, this past week IMDB

Second, even with the recent killing, the really key applications for my work and daily routine (Uber, WhatsApp, Skype, Twitter, Facebook, Feedly, OneDrive, Office, Instagram, Photoshop Elements and Spotify) are still there, they are (relatively) well maintained, and do what I need. Third, because the mail application and calendar are unbeatable, both in terms of functionality and interface, and in the end it’s what I end up using the most.

Fourth, because Windows has Continuum, a functionality that nobody else has, which has been useful more than once and more than two to finish projects while traveling. Fifth, because all these Snapchats, Telegrams, selfies of art and things like that are for hipsters and teenagers.

Well, maybe this last one does not, and surely when the last really useful innovation appears for my work I will have to leave Windows (it happens sometimes – when I have to use Facebook Live I bring the iPad), but until now things have been tolerable.

The uncertain future of Windows Phone

The problem, of course, is that “until now”. Although the OS is really great and covers my work habits and needs perfectly, the fact of using an obsolete platform means that I live on borrowed time. Microsoft so far has been diligent with its security updates (I do not think anyone will attack the five types that we still use Windows Phone, but good) and keeping their applications (Office, Skype, Outlook, etc.) more or less daily . So far I’ve been lucky that the few key applications that I depend on are still alive, and that Edge continues giving the hit with those that are missing.

There will come a day, however, when that does not happen. Microsoft itself has stopped updating some programs, such as the LinkedIn app. There will be a time when having an OS that does not make me want to tear my eyes for their aesthetic decisions is less important than to keep calling home, uploading photos of events or sharing complex documents in Word or PDF without crashes or limitations resulting from the obsolence That day, I suppose, I will breathe deeply, I’ll cover my nose, and I’ll end up buying an LG V30, Pixel or some similar device, while I complain about how ugly everything is for the next five years.

At least, I’ll say, leaving Windows Phone was less painful than abandoning the OS for mobile phones and tablets that was really good and that no one made a damn case with, WebOS. If there is something I can do, it is to choose platforms that are going to sink.