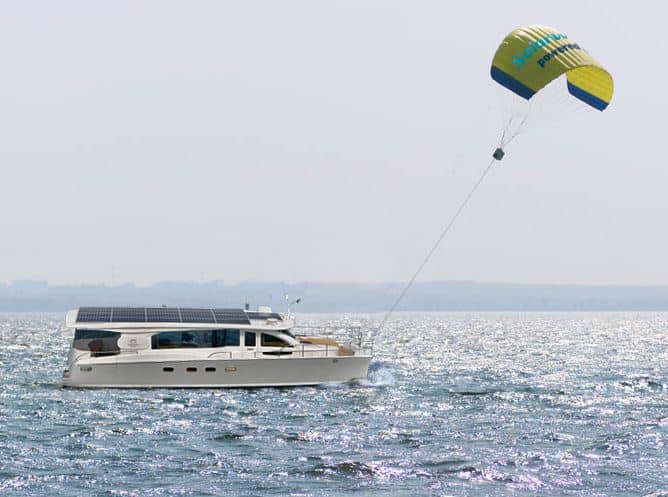 For the first time in the history of shipping, a high-seasight has crossed the Atlantic only with a wind-solar drive. Drawn by a huge dragon, the Zero Emission Catamaran “Race for Water” returned more than 6000 kilometers in just 43 days.

On the ninth April 2017, the Race for Water, sailing under the flag of the foundation of the same name, breaks into a five-year world trip in Lorient in Brittany. As the goal of the first big stage, the crew of this Zero Emission Catamaran headed by Captain Gerard d’Aboville to the Bermuda Islands. If the zero emission catamaran crosses the Atlantic safely and puts it into the over 6000 kilometers away Bermudas, that would already be a sensation.

The offshore Zero Emission yacht sails exclusively with wind and solar energy. At the end of May the message: The Race for Water will be held on 22 May at 13:45 hrs on the Bermuda Islands.

There this zero emission yacht meets the Groupama Team France, which will participate in the America’s Cup and will support the Race for Water. The crew of the Zero Emission Catamaran has a mission: the Expedition is designed to raise people’s awareness of the sea polluted by plastic as well as to serve science. During the world tour, researchers will undertake various investigations and tests, and engineers will develop approaches for new technological solutions to combat marine pollution.

“With this odyssey from 2017 to 2021, we want to show that sustainable solutions exist thanks to innovative technologies to protect the oceans from pollution,” said Lausanne entrepreneur Marco Simeoni, President and founder of the Race for Water Foundation, which is located opposite the Swiss portal Blick , By the way, the 100-ton and 35-meter-long ship still advertises the environmentally-friendly drive by wind power.

And this Zero Emission Catamaran optimally utilizes the striking drag kite that flies over the ship. The Hamburg company SkySails has designed and built the 40 square meter, airy monster. At a wind speed of 25 knots, this kite technique allowed the needle of the Zero Emission Catamaran starboard to cross the Atlantic at ten knots, while at only 15 knots wind speed, 6.5 knots were still possible for the boat. On the average, the dragon’s performance was eight knots.

The power is linked to the flight movements of the kite: it is connected to this Zero Emission Catamaran via a high-tech artificial fiber cable. The steering wheel of this zero emission catamaran is steering the kite, and the control commands are given by an autopilot in the gondola. The dragon is started and landed with the aid of a special device located on and under the deck of this zero emission catamaran.

The kite is to fly at a height of 100 to 150 meters, because there winds stronger and steadier winds than near the ground. In addition, the autopilot controls the towing kites so that they are permanently flying in a horizontal position to increase the pulling force of this Zero Emission Catamaran. In this way, the SkySails Zero Emission Catamaran drive generates up to 25 times more power per square meter than a conventional sail drive, the manufacturer promises in a press release.

The technology behind the towing kite is based on a drive for freight ships, which SkySails has already begun developing in 2002, Henning Kuhl, press officer of the Hamburg company, says. The development to the zero emission yacht drive took about one year. The idea for the conversion was provided by the market itself: “SkySails has received increasingly inquiries from yacht owners in recent years and has therefore decided to develop a product for this market,” says Kuhl. The Race for Water Foundation is a partner in the testing and further development of the technology.

“Unfortunately, shipping is one of the biggest polluters in the world,” says Kuhl. Although the transport of goods by sea is fundamentally energy-efficient, most of the ships are still using heavy-duty heavy fuel as a fuel, wastes generated by refineries in passenger car fuel production.

The 35-meter-long zero emission yatch, which is completely covered with solar panels, has already successfully completed a round trip around the world five years ago. At that time however still without kite, but completely driven by solar energy. The original name was PlanetSolar.

The Race for Water continues its current voyage on 7th July and is heading for Cuba. If you want, the “Odysee”, as the foundation has christened the journey.