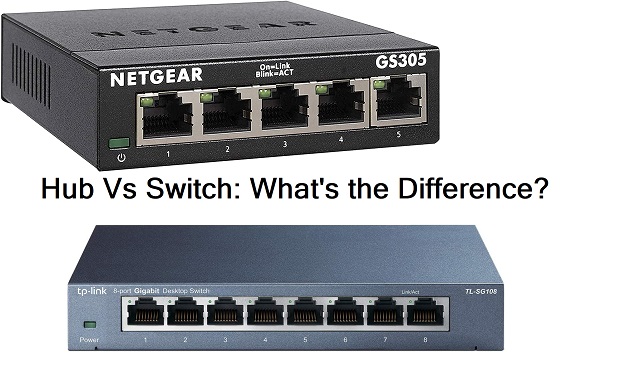 Let discuss and know the difference among the networking devices.  Here is the comprehensive details of networking Hub Vs Switch.

What are Network Hubs:

A hub is employed in computer networking. It is an elementary networking device that helps you to connect multiple networking devices. In addition, it connects multiple networking devices together and making them act as a single network segment. Besides, it does not have the routing tables and intelligence to send data packets and broadcast the network data signals across each and every network connection. They can detect basic network errors such as collisions. It broadcast all data to multiple ports connected it is a security risk, and sometimes it causes bottlenecks in data transmission.  It works as a multiport repeater.

They are significantly cheaper. And they are the primary network devices that do not need an IP address. They are now obsolete and replaced by routers and switches now. An Ethernet hub has multiple input and output ports. The input ports’ data signal can appear at all output ports except the original incoming port. Some years back, connecting network segments by hubs is deprecated by IEEE 802.3 standard. It works at layer one of the OSI model (Physical layer).

What it can do?

Hub is designed to connect multiple networking devices or computers in a private network. It does not have any connection to internet access. When a hub receives data packets, it broadcast them to all other connected devices. Besides, it splits the network bandwidth between the connected devices. Therefore the fewer the connected networking devices, the more they have the bandwidth for each device. It means more connection speed to the shared device.

Hub works as a multiport repeater. It repeats the transmission received from one of its ports to all other ports. However, It can detect the Ethernet preamble (A 56 bits binary pattern, allowing the receiver to synchronize its clock to the transmitter), Interframe Spacing/Gap, collision by sending Jam Signal (Jam signal is a signal that carries a 32-bit binary pattern sent by the data transmission device.

In addition, It can handle only one transmission at a time. Besides, it has no memory to store the data. It runs on half-duplex (HDX) mode. Hubs are also named Concentrators because they function as a central connection point for a LAN.

There are three types. They are

The passive one does not amplify or regenerate the incoming data signals before re-broadcasting them in the network. They receive the data packet in one port and broadcast it to all other output ports. They do not improve the LAN performance and act passively. Usually, they employ Star Network configuration. It helps to identify the bugs and defective hardware in the network. Usually, they have a 10base-2port and RJ-45 connector to connect to the LAN.

They amplify incoming electrical pulses that contain data packers. They do not prioritize data packets. But they can be configured to examine the data pockets.

It can work as a firewall if configured. Besides, It can re-broadcast the weak signal by amplifying and applying retiming and resynchronization protocol.

In addition, it monitors the data packets sent to the connected networking computers. It plays a vital role in sending the data.

It uses store technology to check data before sending it out. In addition, It prioritizes the data packets first-come, first-serve basis. Besides, It can open the damaged pocket then direct and distribute the rest of the packets. If anything happens, they can resynchronize the data packets and transmit them again. Some time data packet cannot reach a designated port due to electromagnetic interruption in the cable. At that time, they can make up for the data loss.

They provide all functions of Active one can do. Besides, It has remote management capabilities. In addition, it has an in-built microprocessor that helps to troubleshoot the network.  They can allocate flexible data rates to the connected network devices. If any of the problems with a connected device can be easily detected, diagnosed, and resolved using the data management system of the Hub.

Application of Hub in Computer Networking:

The following are the  Pros or the Advantages-

The following are the Disadvantages or the Cons-

What are Network Switches:

They can be broadly differentiated into four types. They are;

It is less expensive. Typically it provides basic connectivity. Besides, It is commonly used in small offices and home networks. In addition, they are a plug-and-play model. It cannot be configured.

Similarly, it does have an interface or options to configure. Since you could not configure, you cannot assign an IP address. It relies on auto-negotiation between the network devices to establish communication between them. Besides, it automatically determines the best data transfer rate. In addition, it automatically shifts between full-duplex mode and half-duplex mode. If you prefer a switch that will do the basic functions of the network efficiently without customization, an unmanaged one is the best option for you.

This kind of device is costlier than the unmanaged ones. It has a console port. You can assign an IP address and configure it. Moreover,  It bests suites to large and complex networks. It can be customized to augment the functionalities. The functionalities may be higher security level, network management, precision control, creating and modifying virtual LAN, etc.  Due to their scalability and flexibility, they are preferred mostly. Besides, it can be configuring with SNMP (simple network management protocol). You can control the entire traffic accessing your network. They are the best network switches that support the Gigabit standard of Ethernet. Most of the Managed devices are designed with Spanning Tree Protocol. It helps the administrators to perform quality control services. It is active and intelligent one.

They are intelligent with limited management features. They have a web interface with no CLI access that allows you to configure basic setups such as VLANs, port bandwidth, and duplex.

PoE stands for Power over Ethernet. This PoE technology allows both Data and power transmission over the same cables. It means any connected devices such as a camera’s smart lighting system can function without any AC access or router. It offers greater flexibility and simplifies the cabling. With the help of Cat 5 cable, the PoE injector provides an additional power supply to the various connected devices to enable a home network.

The following are the Advantages or the Pros-

The following are the Disadvantages or the Cons

The following are the Difference between Switch and Hub.

Since Hub is a passive, not intelligent device, it does not have any switching logic. But In the case of Switch, it has its own. But it needs to be appropriately configured; otherwise, an attacker can easily fool it out. A switch configured with exact routing information at the port level will strictly follow the routing information and only send the information to the exact port to protect the traffic. Switches have internal software and firmware for add-on security.