Rare Resources in Abundance on Moon

All of us tend to see the Moon as a small circle in the sky. However, co-founder and chairman of space mining start-up Moon Express, Naveen Jain, perceives quadrillions of dollars’ worth of valuable minerals, which are more than a million tons of fusion fuel together with some prime business estate, which he desires to own. Jain states that several resources that are extremely rare on Earth are in abundance on the Moon and that we should not only be mining the Earth, but should think of the Moon as our eighth continent’.

Moon Express, in last December had become the first private company to have successfully built and tested a Moon capable robotic lander, the MX-1 on the Earth. It intends to land on the Moon itself by 2016, in a bid to claim the $20 million Google Lunar XPRIZE for the first private lander to travel 500 meters successfully along the surface and transmit high definition imagery back home. In partnership with NASA, in October, it was on track in launching a shuttle to recover experiments from the International Space Station. 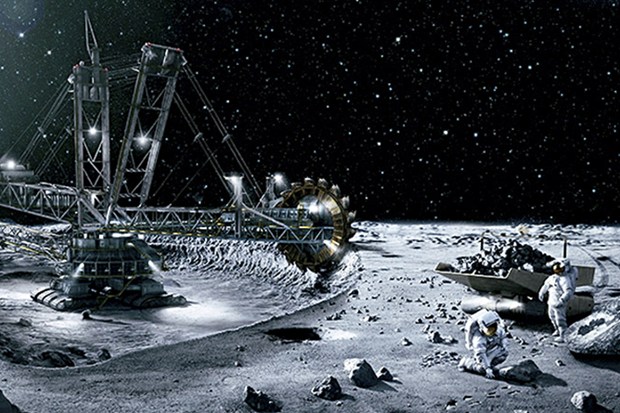 A Small Quantity – Power the Planet for Generations

Jain informs that on its return, it will land with ten meter accuracy and you could land it in your backyard. This is the same type of method which can be utilised in bringing back cargo from the Moon’.Cargo like the helium-3 is an ideal candidate fuel for nuclear fusion. Formed in the Sun and carried in space on solar winds, helium-3 seems to be very rare on Earth due to the protection of the magnetic field of the planet.

The Moon though has no such shield and is likely to have absorbed adequate helium-3 in meeting global energy demand for more than ages. Jain states that from all the surveys and lunar meteorite analyses of the past 50 years, they are aware that it is there in incredible quantities and a relatively small quantity could power this planet for generations.

There are others who are already looking further afield. Deep Space Industries, Virginia based and Planetary Resources, Washington based, both have set their sights on near-Earth asteroids, which is the original source of the Earth and Moon’s precious metals.

Space Travel is Not about Distance

Planetary Resources’ president and chief engineer, Chris Lewicki, who was also former flight director for Nasa’s twin Mars Rover missions, explains that `space travel is not about distance. Everything is measured in terms of the amount of rocket fuel needed.

Asteroids have no gravity and so going there and bringing stuff back needs little fuel as docking with a space station. There are almost 4,000 asteroids which we know of, that are energetically closer to us than the surface of the Moon’. Regarding Moon, the main draw to asteroid mining is the abundance of rare Earth metals found in space, particularly, the platinum group used not only in jewellery but also in the manufacture of everything from converters, catalytic and smartphones to cancer treatments.

Lewicki recommends that access to an abundance of these can have the same effect on technological development like the discovery of how to extract aluminium from the Earth’s crust. However, the high value of the most significant in-space resources is not from their rarity on Earth but from their presence off it, precisely outside of the gravitational field of the planet