There could be instances when sending a text message could be later regretted and a desire to take it back for having sent it in the first place for various reasons. A US based company `Strings’ helps users to reverse these uncertain text messages. An updated messaging application known as `Strings’ give the user, the option to erase messages from recipients’ phones even when they have been opened.

The iOS app which has been recently launched in the U.S. enables users to share text messages, video and images with multiple or single String users somewhat like Whatsapp though with a selection of privacy `controls’. The sender has the option on who can save and download their images and the video from the Strings app as well as delete a sent message or the complete conversation thread, permanently deleting them from the service.

Any content,according to String, which a user deletes will be removed immediately and permanently’ from the phone of the sender, recipient as well as the Strings server, but there are yet no guidelines on how to stop the user from taking screenshots of messages or copy the text of messages into other apps when they receive the same.

This app is available for iOS users only. However in order to delete messages the users need to use the app. Strings is yet to receive UK release date and users are cautioned to be aware of the images, data and messages that are shared online even through services claiming to guarantee privacy that could be easily accessed.

Strings is not the first in the market enabling users in deleting messages but seems to be one of the most popular version with several users. If deleting of messages seems a big task one could also install Invisible Text and the secure messaging app is created with privacy for the user.

Invisible Text has commented on its website that `their app allows user to send messages to another user which will self-destruct after a predetermined length of time. The method of private messaging enables the user to carry on conversation without fear of information being shared with others’.

Another secured app is in the form of Ansa which uses military grade encryption as well as client side key storage in order to ensure that nobody other than the people talking could access the messages exchanged. Besides this, the app also has the potential of self-destruct mechanism which is the same as Invisible text. This app had been developed by Natalie Bryla from San Francisco enabling users to send sell-destructing text messages, videos and images and sender could also view when the receiver had read or viewed their messages sent across to them.

If the message was wrongly sent due to error, then they had the option of deleting the message from the recipient’s device. Ansa app operates in the same fashion as Snapchat by automatically erasing messages, images and videos immediately after they have been viewed wherein on opening the message by the recipient, it tends to remain for 60 seconds and is then automatically deleted whereas in the case of Ansa app, it provides more freedom enabling the user to delete messages remotely from recipients’ device before they even get an opportunity to read the content. 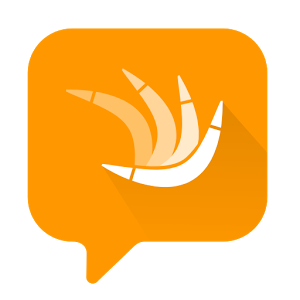 Prior to private chatting, the `off the record’ function needs to be turned on and the messages to be sent or those that have already been sent will get self-destructed in the range of minute one may set.

There is no cause for worry since the recipient would be unable to take screenshots of the conversation and Ansa app can be used by Android as well as iOS users. On Second Thought is another messaging app which empowers the user in taking back their messages while at the time of chatting, it provides an option of `recalling message’ by which the user could take back messages they have sent before it get delivered to the recipient.

In order to get the `recall message’, option, all that the user need to do is to swipe the message left or right and the message tends to remain in dark orange colour for a certain period during which one can recall it where the default grace period is around 10 seconds which can be modified up to 60 seconds.

The app is also equipped with a feature known as `Curfew’ through which the user has the capabilities of controlling delivery of the messages wherein the messages tend to get restricted until the `Curfew’ gets expired. The user has the option on deciding which messages need to be sent. The app would probably be launched this spring in iOS version and can be used by Android users.