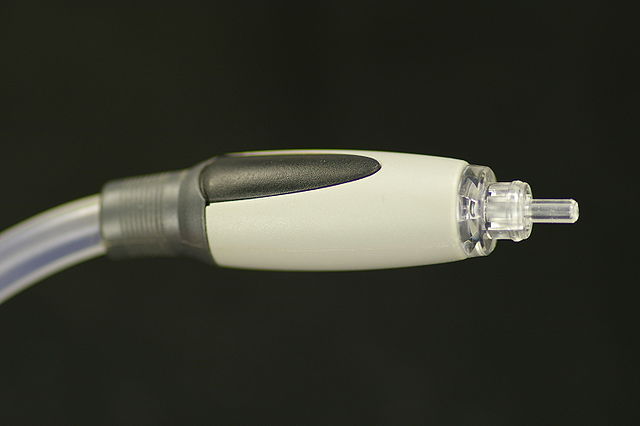 What is Optical Audio or Optical?

Optical audio is commonly used in consumer audio equipment via digital optical sockets. It carries a digital audio stream from component equipment. That audio signals sent through them can be decoded to two channels of uncompressed lossless PCM( pulse code modulated) audio or compressed 7.1 or 5.1 surround sound such as Dolby Digital or DTS surround system. The do not have the bandwidth to carry the lossless versions of Dolby TrueHD or DTS HD Master Audio. Even they are not capable of carrying PCM Audio signals of more than two channels.

An optical fiber is a very flexible transparent fiber made up of silica or plastic. Besides, it is around 1millimeter thickness.

It is the mean for fiber optic communication. It transmits light between its ends.  Besides, it can transmit data over long distances without any loss. In addition, they have higher bandwidth than metal wires.

Why Optical Audio is employed?

The reason is they have lower attenuation than any other medium very much. Since it is not susceptible to electrical interference, there is no cross-talk between signals. In addition, they won’t pick up environmental noise. Since they do not conduct electricity, the component devices are immune to electrical hazards. The digital audio signals are converted into light waves in this connection and send along the optical fiber cable. The cable is TOSLINK cable.  And the port is called TOSLINK port.

Besides, it also does not support high-definition audio formats such as Dolby TrueHD and DTS-HD Master Audio. Discrete 7.1 soundtracks are encoded in higher resolution audio format and therefore are not supported by Optical audio.

It means you can play uncompressed stereo audio and compressed DTS or Dolby Digital 5.1 surround sound over an optical digital audio connection. A high-quality optical audio cable of 5 meters works well. Some cables of 10 meters also can do the best depends upon the cable quality.

There are several types of optical fiber cables employed.

The one mille-meter high-quality plastic fiber is used in the plastic optical cable. Depending on the required bandwidth and application, quartz glass optical fibers and multistrand plastic fibers can be used. The Toslink optical cables are usually 5 meters, and to the maximum, it may be around 10 meters. The further added length of cable should use a signal booster or repeater.

Toshiba was initially created it to connect the audio players to the receivers they designed exclusively for pulse-code modulation audio streams. The software layer is of Sony/Philips Digital Interface (It is a data link layer protocol. S/PDIF interface is to carry compressed digital- audio format for surround sound system). Nowadays, most of the DVD and Blu-ray players and gaming consoles have this to connect digital audio streams to digital decoders. The TOSLINK can carry 7.1 channels of very high-resolution audio. There is not much difference between the audio quality of HDMI and TOSLINK cables.

You can separate the audio signals from the digital source very quickly with the TOSLINK cables. But it is not the easy one in the case of HDMI. I need additional adapters and decoders to do the same job. Most of the older TVs have plain headphone jacks. When you plugged in the headphones to the jacks, the speakers will become disconnected. In that case, the TOSLINK converter comes handy. It eliminated ground loop hum.

What is ground loop hum?

When your cabling system has more than one path for electricity to take the ground, it creates audible noise in the speaker system, called Ground Loop Hum.

Due to bandwidth limitation, optical outputs do not support multi-channel LPCM, Dolby-Digital Plus, Dolby-Atmos, and DTS:X – or high-definition audio such as Dolby-TrueHD and DTS-HD Master-Audio.

Discrete 7.1 soundtracks are not supported since they are only encoded in higher definition audio-formats.

Due to copyright restrictions, the optical connections do not support SACD audio and DVD-Audio.

If you play unsupported formats on your player via optical audio output, the audio player will downmix to stereo format or play a lower resolution version of the audio.

What is HDMI ARC?

HDMI ARC stands for High-Definition Multimedia Interface Audio Return Channel. It was introduced in the HDMI 1.4 Standard Specification in 2009. Now all almost all HDMI Cables adhere to this standard protocol. This protocol helps the Source device and Sink device establish two-way communications between them through the HDMI cable. Since this ARC protocol enables two-way communications between the connected devices via HDMI Port, this allows the audio signals to transfer to and from the devices. Therefore it eliminates the need to use audio cables.

The Audio Return Channel can allow the devices to communicate among them. CEC helps you to operate with single remote control to a maximum of 15 devices.

How does an optical cable work for an audio?

The optical cable is a hardware layer that transfers the audio signals into laser light waves using pulse code modulation. The light signals pass through the optical cable. At the destination, it is again decoded into electrical pulses that contain the audio data. The electric pulses are further converted into an analog or digital signal with a suitable decoder. And the audio signals are further amplified with a suitable amplifier and then fed into your speaker systems.

When was the optical audio system first used?

Toshiba was first used it initially used in the year 1983. It was initially created to connect their CD players to the receivers for pulse code modulation of the audio signals. In addition, it uses fiber optic cables to transmit audio signals as laser light signals between the connected devices. As already discussed, it uses the digital interface named S/PDIF as the software layer and the fiber optic transmission system employed to replace the traditional copper wire cables.