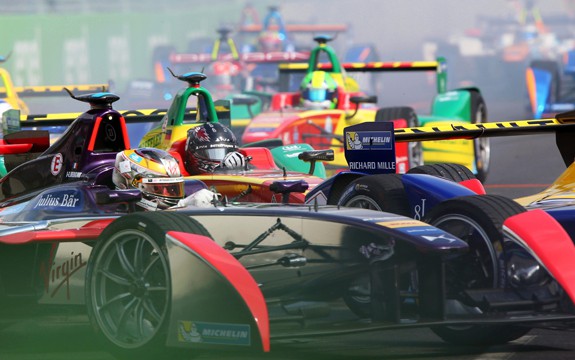 Formula E: A Counterpart to Formula One

Formula E is a counterpart to the well established Formula One racing. In Formula E it is the electric vehicles that will be used in the race. Formula E was basically started to push forward the electric vehicle technology. FormulaE has attracted most of the top of the range car manufacturers like Jaguar, Mercedes, BMW and Porsche.

Formula E has attracted quite a large following but not as much as the already well established Formula One and V8 Supercars in Australia.

What can we expect at the Formula E

The cars at the FormulaE can attain a maximum speed of 224km/hr as opposed to the 350km/hr that one can reach at the Formula One races. This speed is fairly slow as that which the fans are used to at the conventional forms of racing.

Sound of the cars at Formula E

The cars give a sort of a whiny sound as compared to the full throaty sound of the cars seen at Formula One. The roar of the petrol driven cars and the sound of revving up gives an atmosphere of excitement which is missing at the Formula E.

Ways to increase the fan base at Formula E

One of the ways the administrators of the Formula Raceing E are trying to lure spectators to the Formula E is Fanboost.

Fanboost: The fans of FormulaE can vote for their favourite driver through the  E website or mobile app or even via social media. The top three drivers getting the most number of votes get a short but significant boost which they can use during the course of the race. For the teams participating, the motors used for the cars at the  E have an electronically limited power output. The top three drivers who have got the Fanboost get a temporary raise in their power output. With this, the drivers can block an attempted pass or even make manoeuvres to overtake a driver which could be crucial in the final outcome of the race.

The Fanboost strategy is to attract youngsters and social media to the E event. On the other hand, some say that Fanboost will not take into account the skill of the drivers and even the system could be manipulated giving rise to false results.

Media as the game changer in Formula E

Media plays a vital role in motor racing. To run a professional race team is very costly. Top teams get sponsorship and ensure the sponsors get a good media coverage. Every bit of space on the car is covered in ads representing the sponsors.

The start time for events such as the Australian Formula One Grand Prix has been rescheduled to align with the European television schedules.

This brings into focus how media has become the key player in modern society. In this race too, the media plays a crucial role in the communication between the drivers and teams with their fans. In order to get the Fanboost, the drivers at Formula E post live updates and also give their fans insight into their daily lives to boost their profiles on social media.