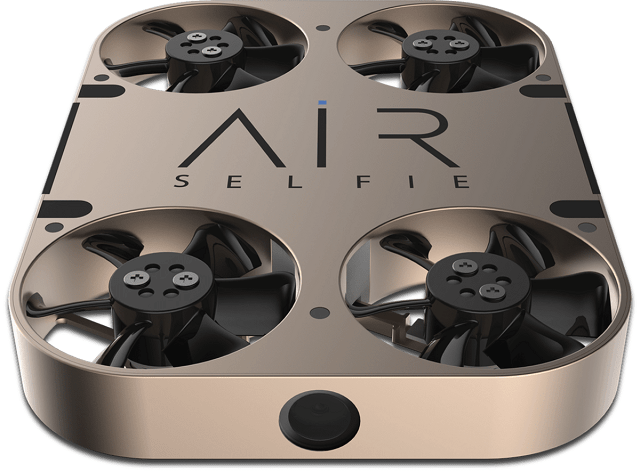 We all love to take selfies and we have our phones to help with that but what about using a drone for our selfie taking? Won’t that be cool? The AirSelfie2 does just that. The original AirSelfie wasn’t that bad. Although there were some minor issues it was the first of its kind, so you gotta expect some glitches. But now after a few months delay, the AirSelfie2 has finally taken off.

The initial AirSelfie was a device that you could attach to the back of your phone. But from using it you would notice that the image quality was not that great and it had poor battery life. The AirSelfie2 is better than the last with apparently better battery life and better quality images.

Specs of the AirSelfie2:

The new and improved AirSelfie2 is a significant improvement from the previous one. It has a 12 mp camera for both full HD photos and video as well. The AirSelfie2 also comes with 50% extra battery life giving it a total 4 minutes and 30 seconds flying time before it needs to go in for a full charge. So you can finish your selfie taking well within that time, I hope.

As for storage, the AirSelfie comes with 16 GB of integrated storage as well as an all new and better app downloadable on both iOS and Android devices.

Availability of Colours for the AirSelfie:

The AirSelfie2 comes in four colours, silver, black, gold and the all famous rose gold. The AirSelfie is the size of an iPhone and can be attached to the back of it like the previous one.

More About the AirSelfie2 Drone Camera:

It can fly up to 60 feet from the base. Which should be good enough for selfie sessions. It even comes with a vibration absorption system, no one likes those shaky selfies.

You don’t even have to worry about charging as the AirSelfie can be charged anywhere at any time from a power bank. That is if your power bank is charged.

This is an obvious one it can connect to Android or iOS wirelessly allowing you to upload your best shots to social media for quick sharing.

What’s the Price of the AirSelfie2?

The AirSelfie2 is available for $200. At this price maybe using a smart phone was best.

The AirSelfie  was first shown off by the company at CES 2018 held earlier this year in Las Vegas. But now the new and improved version is up for sale. The new camera in the AirSelfie has an 85 degree view. You can control the AirSelfie with the app on your phone and can also safely hover the drone in mid air as a spot stand. It can even be safely removed from the air without injuring anyone.

You can get the AirSelfie2 in Amazon or the company’s own website- AirSelfie.