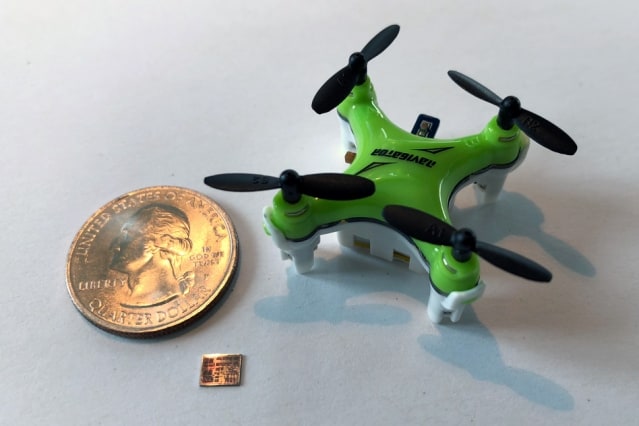 A new chip, a fraction of the size of a quarter was recently invented by researchers to power small devices such as miniature drones. These tiny chips consume less power and can be used for long periods between charges. In a miniature drone, these small chips would be used in determining the relative position of the drone and would also save data like pictures taken while on flight.

The first tiny chip was made a year earlier to power a honey bee sized drone but now scientists at MIT have shrunk down its size further. The size is not the only thing that has been reduced, scientists have also made a chip that consumes less power than before.

The new miniature chip to power a miniature drones:

Named “Navion”, this tiny chip consumes only a fraction of the power of a normal sized chip, to be exact it consumes just 24 milliwatts of power or one thousandth the power required for a bulb. As for its size, the chip is only 20 square millimeters.

This chip can be used to process camera images at 171 frames per second and can also determine its location while in flight that together with its processing can help in navigation. Scientists believe that this chip could find a place in miniature drones the size of a fingernail to navigate places that GPS or Global Positioning Systems don’t have access to.

A lot of Applications for the Miniature chip:

This tiny chip can be used in any device that needs to operate for a long time on a limited power supply. It could also find a place in the medical field where it can be used in pills to determine a medical condition in a person, which needs to be addressed.

The Process of making a tiny chip for miniature drones:

In the past a lot of palm sized drones have been developed by scientists. But with the miniature drones, a lot of the power gets consumed in running the motors and very little is left to navigate or take pictures plus with the battery needing to be charged frequently between runs, these drones cannot fly for long without a charge.

On a normal basis, scientists would take off the shelf chips and program it according to their needs, but where power consumption becomes an issue, they have to consider programming the chip in a completely different way.

Finally scientists came to the conclusion that the only way they could reduce power consumption and make the battery run a little longer was to make a chip from scratch.