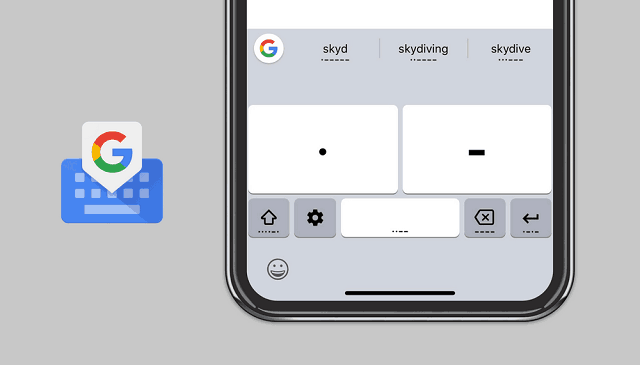 You can now use Morse code on Google’s Gboard

Google has even created a game to teach people to communicate using Morse code, a handy tool for one if they are in trouble maybe? Or maybe it could be a cool way to chat with friends when you don’t want non- Morse coders to know what you are saying? But having Morse code on Gboard helps people with communication difficulties to use a device to communicate and such is what Assistive tech Tania Finlayson had in mind when she worked with Google on the Morse code project on Gboard.

How Morse code on Gboard can help people with disabilities:

Technology today is made for the masses but for people with disabilities it becomes very difficult to use a device that was intended for a person with no disabilities. Therefore this initiative of Google in bringing Morse code to Gboard is a good way to bring everyone onto the digital platform and in getting everyone to use a device irrespective of their physical abilities.

Nowadays when everything is done on phones and other gadgets alike, it becomes very difficult to live life not being able to use these gadgets that have become a staple in daily living.  By simply downloading an app people with disabilities can live life much easier knowing that they can access the world now with just the tip of their finger.

Finlayson also stated that a person with reduced mobility could even hook on external switches to their mobile device to operate it instead of using their fingers.

Google has even created a Morse typing Trainer game which it boasts can train people to use Morse code on Gboard in under an hour. This morse code game is available on both desktop and mobile versions. What is even better is that the game is free for anyone who is interested in learning Morse code.

A Little about Morse code:

Morse code is a communication system that dates back to the 1800s and has been used widely as a both a visual tool and an audio tool. It is used to rapidly convey information both by people with disabilities as well as was used with telegraph lines, radio circuits and undersea cables.