For quite a long time Gmail users on the iOS platform has complained about the inferiority of their Gmail app when it competes against the Android one. Android version of Gmail has been quick at getting latest updates, tweaks and feature enhancement in the last couple of years which has made it a force to reckon with.

But the Gmail app on the iOS didn’t found such favor from Google and turned into a semi-broken version of the Gmail since 2012. Finally Google gives a notice to this issue and brings an overall change or update to the Gmail app which was found missing for last four years.

Features to look out on Gmail for iOS

Gmail app on iOS now resurfaces as its Android counterpart with modern app look, feel and design. It adds big images of the contacts right beside the message so users can quickly understand who had sent that mail.

It also has animated sidebars and menu with a materialistic which makes it easier to move around the app. Use of materialistic design also removes the difference from Gmail app present on both the mobile OS platform to a great extent. 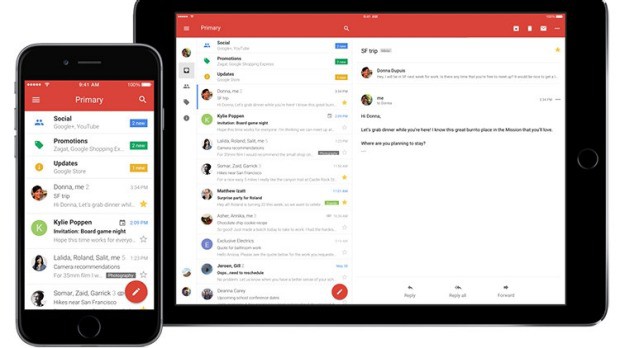 Furthermore Gmail apps gets added speed or it can be said efficiency when it comes to dealing with mails or moving throughout the app. It doesn’t happen to sluggish like before. Auto correct feature rolls into the search which helps in completing the queries and even offer suggestions to the users. Simply swiping away the email will help in either deleting or archiving the email without even reading it.

Gmail on iOS finally gets the taste of ‘Undo Send’. This feature was first introduced on the Android platform as well as on the web version wherein Google adds a delay to the sent message.

This gives the much needed time to the users to save themselves from any kind of embarrassment even after sending out the message. In case you had sent a message to wrong person then simply give a click on the Undo option and it will stop the email from going further. It is a great feature which can helpful in stopping accidental mails from going further.

Reasons behind not updating the app sooner

For iPhone users these features were present at their disposal through Google’s Inbox app for a long time. This happens to be one of the concrete reasons for not bringing the updates or features induction to the Gmail app for so long.

The difference between Inbox and Gmail app is quite distinctive. Inbox allows users to sort the chaff emails, and put messages to deal with later on along with interacting with the mail while Gmail simplifies the sorting of the email by sorting them out through categories and even allows efficient managing of multiple accounts on the go.

Google finally brings the efficiency, swiftness and ease of the email experience to the users through much-needed update to the Gmail app on the iOS platform.