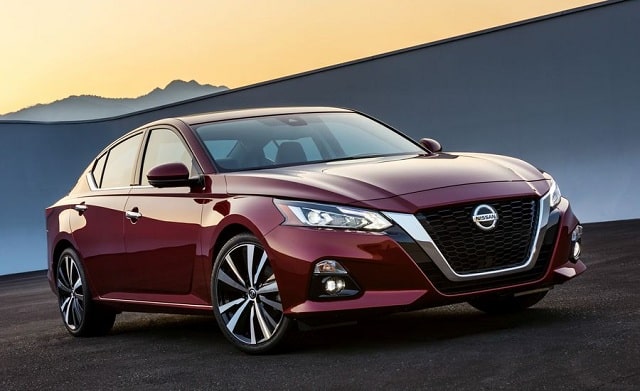 Nissan has developed two new engines and an all-wheel-drive system for its latest sedan, the 2019 Nissan Altima. Though many Americans are opting out of sedans and going in for SUVs, Nissan believes that there are people who favour style over utility. The automakers are also not in a hurry to give up on the sedans. They believe that sedans are still a family favourite. Will the 2019 Nissan Altima be comparable with the mainstays such as Toyota, Honda and Hyundai?

As far as looks and design of the 2019 Nissan Altima go, then the new sedan has sharper yet subtle lines.  The roof is an inch lower, the body 1 inch wider and the front a bit shorter. The wheels are 19-inches and the grille is more pronounced.

With the dimensions of the engine being smaller, the hood is lower, the headlights narrower and the turn signals are on the lower bumper. There is more space in the interior and an 8-inch touchscreen higher on the dashboard. The overall interior has a sleek look.

The 2019 Nissan Altima comes with two four-cylinder engines. One of them is the standard 2.5 litre and the other is an optional turbocharged 2.0 litre. The predecessor had a 2.5 litre engine, but the engine of the 2019 Nissan Altima has smaller dimensions and a higher output. It has a 188 horsepower and an increase of 1 mpg to give it a 32 mpg (front-wheel-drive models) of combined fuel economy rating.

The enhancement is the new turbocharged 2.0 litre engine that replaces the V6 of the earlier Nissan. The  Nissan Altima uses the industry-first variable compression technology that gives it an edge in terms of performance. Due to its engine, the compression ratios can vary in real time, from 8:1 to 14:1, thus giving both power and fuel efficiency.

Coming to the new turbo four-cylinder of the 2019 Nissan Altima, though it makes less horsepower as compared to the V6 of its predecessors, it generates more useful low-end power. It unloads 280 pound-feet of torque at 1,600 rpm as compared with the V6.

The turbo-four cylinder of the   Altima delivers 29 mpg combined, which is also a greater improvement on the V6.

With regards to the 2019 Nissan Altima offering an all-wheel drive, it is better suited for those who live in wet climatic areas. It is not suitable for those looking for sporty vehicles on dry roads. The 2019 Nissan Altima defaults to front-wheel drive in most situations, but it can send 50 percent of its engine power to the rear wheels when required for a better grip as is seen in slippery conditions.

The  Altima will be selling at around $35,000. The 8-inch touchscreen, phone integration and ProPilot Assist on the expensive trim levels gives it an edge over some of the other rivals.