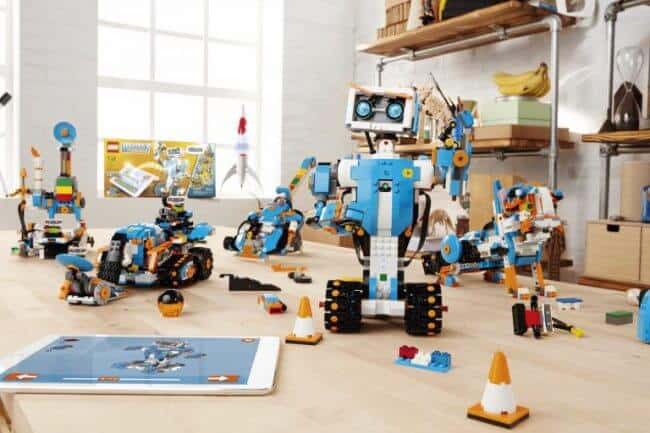 Lego presented at CES technology fair Boost, a new brand that will make Danish building pieces come to life (the dream of every child).

Lego Boost is a set of leisure robotics aimed at children between 7 and 12 years to play and also learn to programme. Younger children can move their building blocks thanks to the motors and sensors included in the set. And yes, it has a component as an educational robot but that is not its main purpose (for this there are already the Lego Mindstorms and Lego WeDo sets).

According to Simon Kent, one of the main designers of the project, Boost is inspired by the Maker movement and where children play and work their most creative side with Lego pieces and let their imagination run wild.

The colors of their pieces. Very happy (far from the Lego Technic style) and nothing of only grays, blues, reds, blacks … We like to see that it is a set that is not only for boys or girls.

The initial set includes a motor called Move Hub, a sensor of movement and distance, more than 840 pieces of construction and a mat to make it easier to solve the challenges when programming the robot. Fun and projects for a while.

Includes in the app step-by-step instructions to build 5 projects: the robot Vernie, the cat Frankie (who plays the piano), the guitar 400, the M.T.R.4 (Multi-Tool Rover 4) and an Autobuilder. For the classic Lego sets, with Boost, they do not come on paper.

In addition to building and programming robots, children can add their own voice to the robots, make music or respond to their commands.

It can be mixed with the pieces of Lego that we already have at home and make new constructions. And with how active the Lego fan communities are, we’re ready to see incredible ideas.

We answer your questions

How much does the application cost?

Totally free and available from Apple, Google and Amazon stores. In the app come the instructions and how to program the robot. In addition, the app includes more than 60 activities designed for children to play, build and have fun programming.

Is the tablet used by my child compatible with Lego Boost?

There are some complaints that it is not working on all the tablets. It is compatible with Apple (iPad Pro, iPad Air 2), Amazon (Fire HD10, Fire 7, Fire HD8) and a lot of Android. If you doubt, here is the list of tablets that Lego ensures compatibility.

How are the movements programmed?

The programming is by blocks that are dragged. They will indicate the step by step how to do a programming but afterward, the child will also be free to make all the changes that he wants. And since it is so visual, it is ideal for children who still do not know how to read well.

Is it compatible with Scratch?

The latest version of S2bot already supports Boost and there is some project video with Scratch.

The initial Lego Boost set is called Creative Toolbox and has the code 17101.

Age: children between 7 and 12 years old. But something smaller, they will not have problems to play with him.