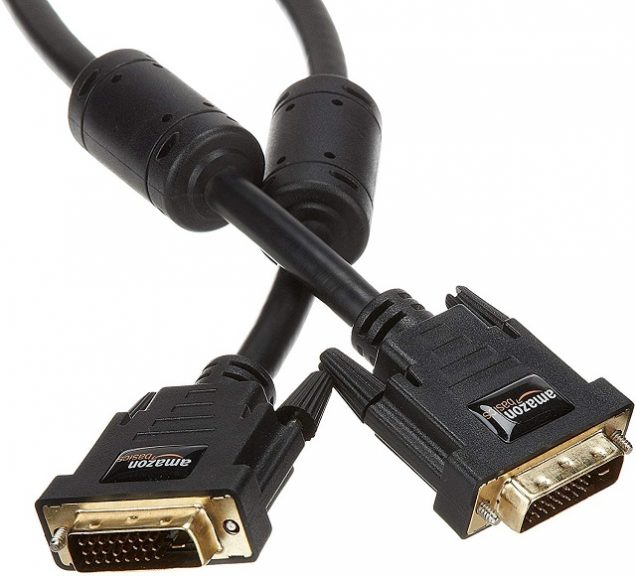 Digital Visual Interface, popularly known as DVI, is a video display interface used to connect a video source (video display controller) to a sink display device, such monitor. It was treated as an industry standard for transferring digital video content.

What is Digital Video Interface?

Digital Video Interface is the only well-known video standard that includes analog and digital transmission in the same connector. When Digital Visual Interface protocol was introduced, most of the monitors were cathode ray tube which can read analog video synchronization signals.

It is designed in such a way to transmit uncompressed digital video, and it can support motile modes such as Analog, Digital, and both Digital and Analog. Digital Visual Interface specification is compatible with the Video Graphics Array (VGA) interface. Its compatibility with VGA, the computer display standard, led to its widespread acceptance as a display standard for Plug and Display, Digital Flat Panel, and more. It is widely used as a display standard for computer applications, and it is employed in some Digital Video Player units and Television sets.

In simple terms, Digital Visual Interface is used to transfer the video signal from a computer video display controller to a computer monitor or a display unit. Its objective is to create an industry standard for transmitting digital video content from Source to Display.

The Digital Visual Interface is designed and configured to support multiple modes. They are DVI-A (Analog only), DVI-D (digital only), or DVI-I (digital and analog).

The Digital Visual Interface connectors include Pins for the DDC (Display Data Channel). The latest model, DDC2, allows the graphic adapter to read the monitor’s EDID. If a display unit can support both digital and analog singles in one DVI –I input. Then, it up to the display unit to choose the best transmission.

One Source and Display are connected; they establish communication between them. The sources fetch details about the display capabilities by reading the display units EDID Block. The monitors EDID block contains the identification, color characteristics, supported video modes table, etc. The table of supported video modes is the native resolution of LCD and other Flat Panel displays. Each and every mode have some specific CRT timing values that define the frequency and duration of the horizontal and vertical synchronization, active display area, refresh rate, and resolution of both horizontal and vertical resolution. Once the monitor’s capability is read, the digitally encoded video pixel data is transmitted using multiple TMDS links. Multiple TMDS is used to reduce the electrical noise due to electromagnetic interference and other forms of analog distortion.

Single link connection consists of four TMDS; each Link transmits data from the source to the sink device over the twisted pair. Of the four, three of the links allocated for RGB components of video signals for a total of 24 bits per pixel. The remaining Link carries the data of the pixel clock. The 8b10b encoding is employed to encode the binary data. The data is not sent as network packets. Instead, it sends the pixel data as if it were a vector graphic if it is an analog video signal.

The complete frame is drawn during each and every vertical refresh period. Therefore, the total active area of each and every frame is transmitted without compression. The video modes use horizontal and vertical refresh timing of the display unit. The maximum pixel clock support frequency is 165 MHz of resolution 2.75 Megapixels at a 60Hz refresh rate. Since the dual-link Digital Visual Interface have double the number of TMDS pairs that doubles the bandwidth of the video transmission. Therefore it can support 2560×1600 at a 60 Hz refresh rate.

The transmission is entirely on the pixel clock frequency. Therefore, the maximum length of the cable is not included in the specification.

The Digital Visual Interface connector on a device is named depending on which signals it implements of three names.

They are DVI-I, Integrated, which combines digital and analog in the same connector; the digital may be single or dual-link. DVI- D is a digital-only relay on a single link or dual-link. And the last one is DVI- A is Analog. The single Link has some maximum allowed data rate that dual-link will double the allowed data. Single Link employs single 165 MHz transmitters that support the resolution of 1920×1200 maximum at the refresh rate of 60Hz.

Most of the connectors other than the “A” type have pins that pass digital video signals. The dual-link connector adds six pins at the center. The second transmitter is to increase the bandwidth to support the resolution of the maximum of 2560×1600 at 60Hz. Sometimes the dual-link connectors are referred to as DVI-DL. Dual-link is entirely different from the dual-head or dual display. Dual display is nothing but a single computer connected to two different monitors.

Besides, some connectors also have some pins to pass analog signals. That may help to connect an analog monitor. The analog pins are four in numbers. They surround the flat blade of the Integrated and Digital Connectors.  Therefore a VGA monitor can be connected to a video source with the help of an integrated connector as a passive adapter.

More About the Connectors:

The analog pins are directly compatible with the VGA signal. However, the long flat pin of DVI- Integrated connectors pin is wider than the same DVI- Digital connector pin. Therefore it is impossible to connect a male DVI-I to a female DVI-D even if you manually remove the four analog pins. Male DVI-D cables may fit in a female DVI-A connector but will not work as they do not carry any analog signals. It is because the Digital Visual Interface protocol uses the low voltage differential signaling known as FPD- Link.

By using the proper adapter, the HDMI and DisplayPort connectors can support DVI- D video signals. But it cannot support some additional features that HDMI and DisplayPort. Generally, most digital monitors have Digital Visual Interface D-type connectors. The monitors that can support both digital and Analog have both VGA and DVI D connectors. The Female D connectors cannot connect with male DVI A and DVI – I, since it lacks the four analog-digital pins.I” type connector with a single link have 23 pins, and dual-link connectors have 29 pins. So they do not convert Analog into a digital signal. But it can accept Analog or digital signal.

Its data channel transmits at a bit rate that is ten times that of the clock signal frequency. For each clock period, there are 10- bit binary symbols per channel. Besides, a set of three 10-bit symbols represents one pixel in single-mode and two pixels in dual mode. It provides differential pairs for clock pulses and data. Though the video data and signals and clock data are not aligned, the ratio between the clock and the data (1:10) helps align them easily. In addition, the clock/ data recovery helps the receiver to recover the bits on the stream.

The specification allows the clock to vary the input between 25MHZ to 165MHZ. The Digital Visual Interface  encoding is straightforward to transform the signal from digital to Analog using video digital to analog converter (DAC). The Displayport reconstructs the clock from the data (both clock and synchronization signals) sent over the Link.

The analog link is to keep the compatibility with the earlier versions of VGA cables and connectors. Thus, HSync, VSync, and three video channels available in both VGA and Digital Visual Interface are electrically compatible. Besides, auxiliary links like DDC are also available with the analog link.

What is a Video Interface?

The video interface is a standard used in transmitting video data from the computer’s video display controller to the monitor unit for data visualization.

What are Digital Video and Analog Video?

Digital Video is an electronic representation of encoding video signals into digital data. In analog video, the video signals are sending as analog signals, but it comprises a row of digital images displayed in quick succession in digital video.