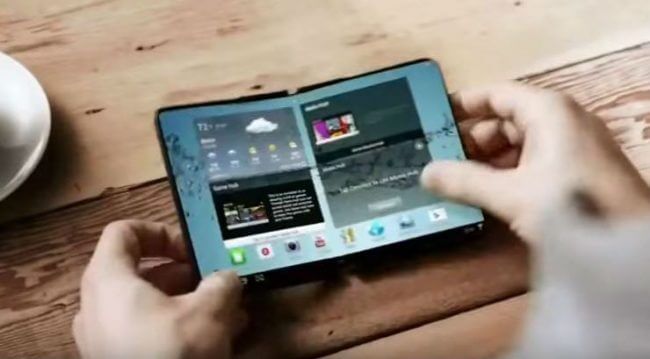 Samsung has planned to introduce its foldable smartphone by next year into the market. As part of the Galaxy Note series, it would be the first mass-produced device with the foldable screen.

We have been hearing so much time that the smartphones of the folding screen will arrive in the market that everything seems extracted from the story of Pedro and the wolf. However, some proposals have come to crystallize, such as curved screens that, while not foldable, have been a first step in the evolution of smartphone panels.

Samsung is one of the main stakeholders in bringing the project of folding screens out, not in vain has more than one patent on it and is known to take time researching in this field. Now it seems that we will see at last a real model, one similar to the one that Lenovo presented a few months ago. Samsung prepares folding screens for the Las Vegas CES that will usher in the 2017 technology.

According to The Guardian, the president of Samsung’s mobile phone division Koh Dong-jin said that a foldable smartphone was planned for the coming year. Until then, technical hurdles had to be overcome, which is not known. Accordingly, an appointment for the market launch of the new device known as Galaxy X could also be delayed beyond the year 2018.

So far, Samsung does not use its flexible OLEDs in situations where they are moved regularly: in Curved televisions and smartphones with curved display edges like the Galaxy S8. The first concept for a foldable smartphone Samsung had already introduced 2013 in a commercial at the CES – then for the fictional smartphone Samsung Youm.

Since the first introduction of the Youm, analysts and amateurs have been wondering if and when Samsung will launch a smartphone on the market that will be unfolded to the tablet. Also, LG and Lenovo work on similar devices, the statement Kohs is, however, the first official confirmation of a planned production. Whether more exotic functions create it in the device, as they have been known over the years from some patent, is rather unlikely: Among other things, Samsung had filed a patent application to delete files by crumpling the display.

According to recent studies, according to CMO, the smartphone has long since replaced the desktop computer and the laptop as the most popular way to the Internet. In doing so, the average devices each year become a piece larger and thus also increasingly bulky and heavier to stow away. Smartphones are now the most popular way to consume media. One, whose display is usable on tablet size, but can still be carried in a pocket, could hit exactly the nerve of the time.